When Walt Disney Animation studios brought us Wreck-it Ralph it was clear to everyone that they don’t longer need Pixar to become the kings of animation feature films. But their genius move, which is actually the one movie that restored everyone’s faith in Disney, is Frozen. Frozen brought back the magic of old classics, the songs and the joy of our childhood days and was amazing not just for kids. With a brilliant move like this one, Disney sat the bar pretty high so their next movie had a great amount of pressure surrounding it. I’m saying all this because in fact Big Hero 6 is not as magical as Frozen was but it’s still a genius move since Disney’s animation was at last combined with Marvel’s storytelling. For kids, for grown-ups, for entire families and for those who are just looking forward to see something cool, Big Hero 6 won’t fail your expectations. 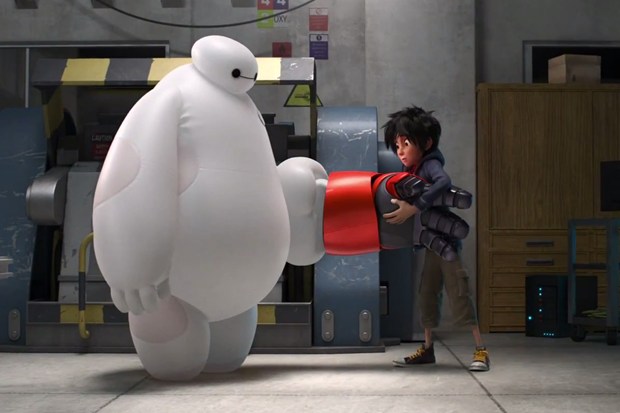 Big Hero 6 is the story of the special bond developed between a plus-sized inflatable robot destined to make everyone’s lives a lot easier, Baymax, and a prodigy kid Hiro Hamada. Together, these two guys will protect the city of San Fransokyo from a mysterious masked man that is putting everyone in danger by using microbots to create everything he imagines. With the help of several college friends, Hiro and Baymax will try to uncover the truth about the dangerous and mysterious events happening in the city, becoming this way a team of high-tech heroes called Big Hero 6.

Baymax is the cute and funny thing from Big Hero 6, just like Olaf was in Frozen. As a creation of Hiro’s brother, Baymax is the most important thing left from his brother after an explosion in their college. Baymax is kind, sweet and always there to help Hiro feeling better and is ready to take care of anyone injured or sick. As a guy who loves robotics and robot fights, Hiro is a prodigious kid with an incredible taste for science and who is brave and determined enough to make our world a better place. Big Hero 6 introduces therefore a different style into Walt Disney’s stories… There’s at last room for technology and for innovation which is amazing and captivating. For kids, this could be an inspiring life lesson about the importance of studying and working hard and also works as an action-packed animation film. The characters in Big Hero 6 are a key element since they provide an easier way to relate the plot with the real world. With the field of robotics evolving so much year after year, Big Hero 6 might be a good way to introduce an interesting field of science to kids these days (Yes I’m a robotics student so probably this influenced my opinion on Big Hero 6). In the movie we witness a major transformation in the characters from college students focused only in their studies into true and brave heroes, ready to protect our world from a huge threat. Of course that just like in every other Disney animation film, this one has really emotional scenes related with the loss of family members and has the kind side of a robot programmed to make everyone feel better and also to fight enemies (with ninja skills).

Big Hero 6 is mainly an adventure and can be enjoyed by everyone in the family. However while most of animated movies nowadays introduce kids to fantastic worlds, this one tries to impress with a reality not distant from the one we’re living. There’s the relevance of ethics in science, the sadness of losing a family member and a display of how rewarding our studies can be. It’s an adventure focused on science and knowledge with the plus side of having Marvel in the backstage. Big Hero 6 is a different movie about a different kind of heroes and even though it lacks the magic of Frozen, it’s still a captivating and interesting journey.

With an enjoyable soundtrack, a quick pace and a funny and cute robot ready to entertain everyone, Big Hero 6 is not Disney’s best work in terms of animation films but it’s surprising in the way it captivates and impresses younger audiences. Even though it fails reaching the standards of Frozen, Big Hero 6 is entertaining, curious and thrilling and inspires a younger generation to do something good for the world and to work hard to achieve goals. For the first time, Marvel and Disney join forces, super heroes and animation for a funny adventure that shows how amazing science can be.