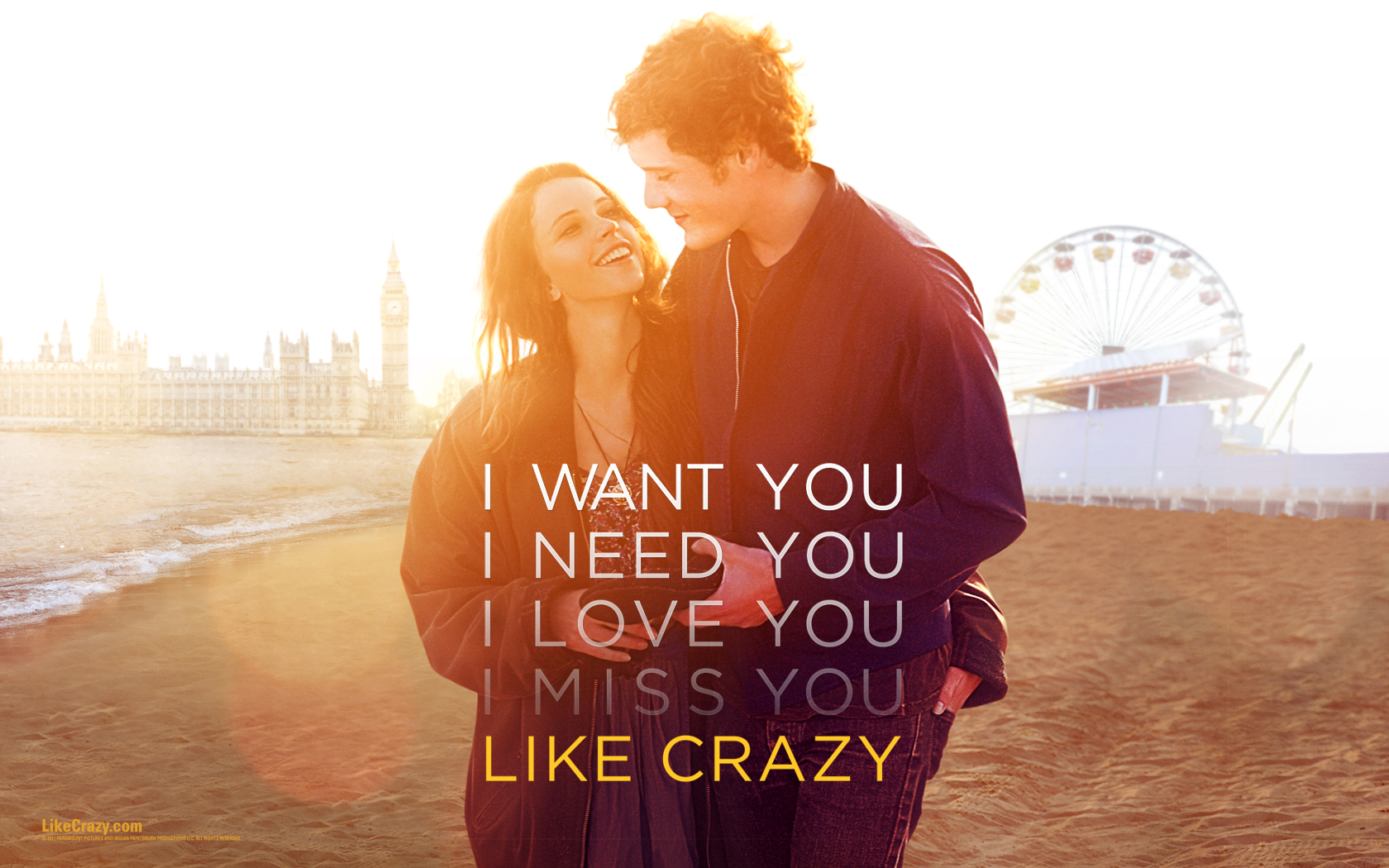 After a series of days without posting anything in Panda’s Choice because of some really complicated weeks at college I welcome you all to a world of “hyperbolic” drama in which everything happens too quickly and there are some weird things going on like a girl’s addiction to whiskey and the fact that boys love to give chairs to their love ones. This movie received really pleasant reviews and I was really excited to watch it but unfortunately it ended up being a rollercoaster of bad things. “Like Crazy” is a 2011 movie directed by Drake Doremus (the same director of the upcoming George Orwell’s “1984” adaptation with Kristen Stewart and Nicholas Hoult as leading actors) about a British college student who falls in love with and American student. After overstaying her visa, she is forced to return to her country. While separated, they have to think if the feelings they have for each other are strong enough to bare the distance between them.

After reading the summary of the movie I wanted to watch it so badly because I really thought that the all overstaying visa thing was interesting and it could work really well in the middle of a devastating love story. Unfortunately after watching 30 minutes of the movie part of my interest was gone after witnessing a series of dramatic situations that try really hard to make you sad but it just didn’t work for me. I felt that the chemistry between the “power” couple of the movie was weak and some of the dialogues were just dumb. I know that they loved each other a lot but she was conscious of the consequences regarding overstaying her visa and she knew that after two months of vacations she could return to the USA and they could live happily ever after. If this happened, probably the story would be a lot better because after deciding to overstay her visa and spent the summer with her boyfriend, she is forced to return to her country and therefore to be separated from him. A couple of months after that, both of them have steady jobs and lives and he decides to visit her and in the middle of his visit his “father-in-law” decides to suggest them to marry each other in order to allow her to enter in America. Now that I’m writing this review I realize that was probably the lack of chemistry between them that made me “hate” the story because the plot is not that bad.

After his trip to the UK, he returns to his country and he falls in love with Sam, a much nicer girl interpreted by Jennifer Lawrence. Now the fun fact of the movie is that the chemistry between these two is a lot better than the chemistry between him and the British girl  which I think that doesn’t make any kind of sense because you start to support his relationship with Sam and the movie is going on in the opposite direction. He leaves Sam, he marries the British girl, they argue a lot because after all that she is still not allowed to travel to America due to some issues with the law, he returns to America and starts dating again with Sam.

After all this, what happened in the end of the movie was a bit unclear to me. I was really rooting for his relationship with Sam (he was clearly happier with her) and I was annoyed with the way that the British girl was constantly stealing his happiness. The lead female character was perhaps one of the most annoying I’ve ever seen and trust me when I say this because after watching Charlotte Gainsbourg in “Lars Von Trier’s Antichrist” I honestly thought that was really hard to watch another woman reaching this “prestigious” mention.

Sad and with poor performances and dialogue, “Like Crazy” has a strong premise but it fails in entertaining and in making sense. An example of what a “hyperbolic” drama is and a complete disappointment to me that was partially saved by the relationship I was rooting for.