Yesterday I had so many doubts regarding whether should I or shouldn’t watch the return of Arnie as the robot everyone loves… All this thanks to a couple of trailers and clips that looked not promising at all. Let’s face it… It’s true that as the fifth installment of a highly-successful franchise there’s not much that needs to be done to satisfy the fans. Ultimately, entertainment is the main ingredient this movie needs to work. Well this plus a pleasant story and to be quite frankly, I wasn’t expecting none of this things. So, there you have it, I had no hope, zero expectations and for me this was a sure miss. Thankfully I was wrong. Yes, Terminator: Genisys is a bit far from the two original movies. It lacks intelligent content, the story is mediocre, even though it’s faithful to the first two movies, and visually we’ve seen better… But despite all that, I had fun. Terminator: Genisys may not be the sequel the fans were waiting for but it was still an entertaining ride.

When John Connor (Jason Clarke), leader of the human resistance, sends Sgt. Kyle Reese (Jai Courtney) back to 1984 to protect Sarah Connor (Emilia Clarke) and safeguard the future, an unexpected turn of events creates a fractured timeline. Now, Sgt. Reese finds himself in a new and unfamiliar version of the past, where he is faced with unlikely allies, including the Guardian (Arnold Schwarzenegger), dangerous new enemies, and an unexpected new mission: To reset the future… [from IMDb]

Yep, I know that these movie just messed up the entire timeline and that there are somethings in it that don’t look good. First of all, the movie begins strong, with a clear description of how the future is and how John Connor lead the humans towards victory and this managed to be a great kick-off for the movie. The problem is that after sending Kyle back in time to protect Sarah… Well, I don’t know how to say this but Jai Courtney lacks something in this movie. He looks so bland and he doesn’t express any emotion in the movie (a bit like a male version of Kristen Stewart). Emilia by other hand got me right in her first scene, she is great at playing this young Sarah who looks innocent but who is, at the same time, incredibly strong and the way she handles with everything is quite pleasant to watch. Every time she’s on the screen, she controls the flow of the story and gives something to the viewer to root for. John Connor also returns to the past for a series of funny dinner talks with his mom and dad and of course we can’t forget Arnie and his great quotes and creepy smile… The old man still knows who’s in charge of everything. 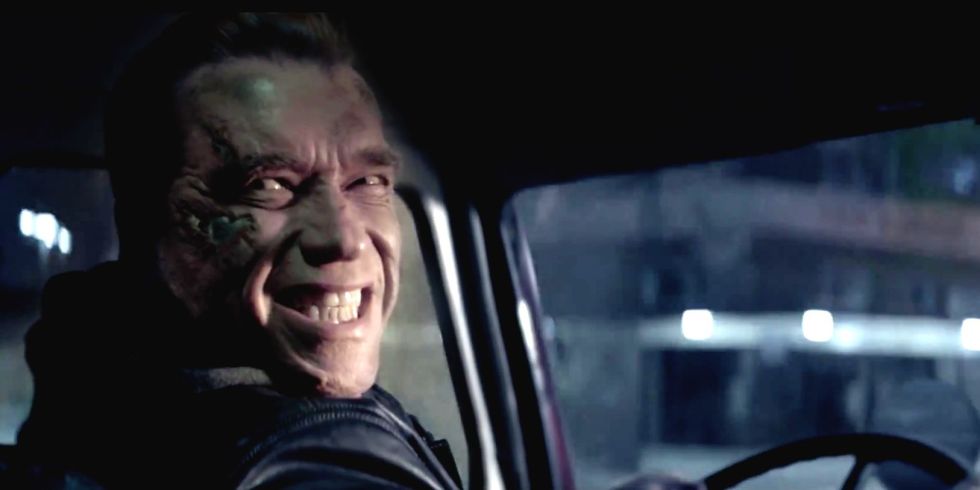 As I’ve said previously, the visual effects were not that amazing, but in the trailers they look much worse. The story has several flaws but it manages to be faithful to Cameron’s original ideas. Even though nothing new is added to the plot, Terminator: Genisys is an entertaining action flick, with good and enjoyable moments. The action sequences are good but there’s nothing memorable to be mentioned. It’s like you root for those guys, you leave the theater satisfied but ultimately there’s not much besides that. Having said all this, I had a good time watching this. It’s not a big deal, it’s not the movie Cameron’s franchise deserves but it’s still quite enjoyable. Probably the fact that I had no expectations regarding the movie ended up weighting a bit in my analysis but to be quite frankly, I had a good time watching this one. Good action sequences and Arnie’s best moments made me forget about the lack of chemistry between Jai and Emilia that contrasts with her cool performance. Ultimately, for a movie that begins strong but that fails in keeping the pace, Terminator: Genisys has enough potential to entertain.