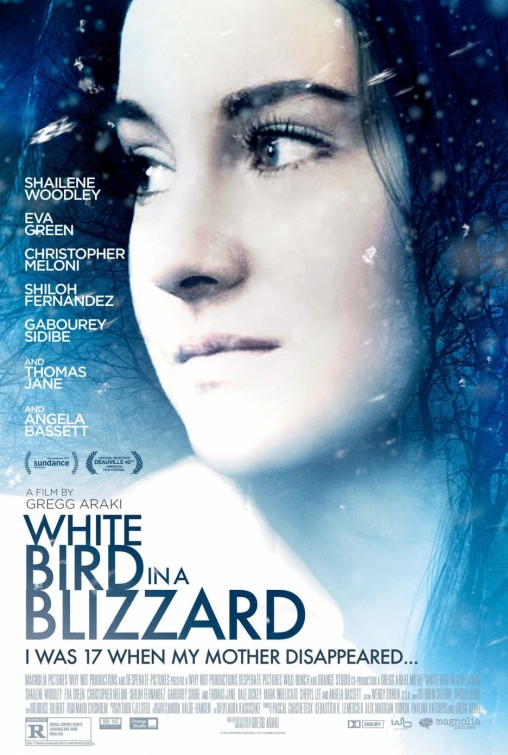 The first time I saw Shailene Woodley performing was in The Spectacular Now, a beautiful coming-of-age movie that entered immediately in my list of favorite movies of that year. Ever since I saw her in that movie, I never imagined her performing in a more complex or serious role that demanded a higher level of attention. So, in a way, White Bird in a Blizzard is a brave step in her career. What amazed me the most about this was the fact that the young and talented actress I saw performing in both Spectacular Now and in Fault in our Stars, two quite different movies that don’t leave the romantic field, did an amazing job playing a character that had to deal with a roller coaster of emotions, in a role that captured my attention during the whole movie.

Kat Connors is 17 years old when her perfect homemaker mother, Eve, a beautiful, enigmatic, and haunted woman, disappears – just as Kat is discovering and relishing her newfound sexuality. Having lived for so long in a stifled, emotionally repressed household, she barely registers her mother’s absence and certainly doesn’t blame her doormat of a father, Brock, for the loss. In fact, it’s almost a relief. But as time passes, Kat begins to come to grips with how deeply Eve’s disappearance has affected her. Returning home on a break from college, she finds herself confronted with the truth about her mother’s departure, and her own denial about the events surrounding it… [by: Production]

If you ask me what went wrong in the movie, I think it was mostly the discontinuities on the plot, that appeared to be a safe play, with a predictable flow when it comes to movies of the same genre, and that ended in an abruptly and unexpected way that made no sense whatsoever and that left me with my mouth wide open while I was asking to myself What the HELL is going on here?!. Basically things happen in a slow pace to give a bit of a mysterious tone to the plot, even though your head already knows what’s going on there (yes I was wrong but I still can’t believe in the way things ended). You have enough time to meet the movie’s main characters and to develop an affection for some of them. Shailene and Eva Green are the two positive points in this sea of darkness, while they shine in unusual characters that relate with each other in an un-ordinary way. While Eva plays the perfect homemaker mother, Shailene is seizing her teenage years in a rebellious way. Basically they represent two opposites that collide several times in the movie and their confrontations get worse as long as we approach the already mentioned twist.

The whole idea of White Bird in a Blizzard appears to be attractive and its tone is quite peculiar. The slow pace allows us to feel affected by the character’s issues and that’s a good thing. But, unfortunately the story doesn’t keep up with that and in the first act of the movie is quite easy to draw a line of events that could easily be the rest of the plot. Thanks to Shailene and Eva, there’s still something to enjoy in Gregg Araki’s White Bird in a Blizzard, with her interesting performances that add something different and captivating to the movie. Even though this movie gives almost nothing to its genre, the way the characters interact and the way they handle with the problems made the whole thing look a bit better. With a troubled plot that is a bit mysterious, Gregg Araki’s latest movie allowed Shailene Woodley to show how talented she is while she shined as a white bird in a blizzard.